Blessed Mary of the Apostles 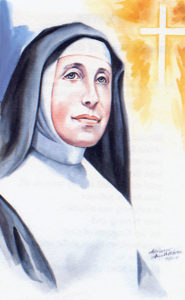 Blessed Mary of the Apostles was born Therese von Wüllenweber, at the family’s castle of Myllendonk near Mönchengladbach, Rhineland, Germany, on February 19, 1833.

Strongly attracted to the mission ideal, Therese wanted to consecrate herself to God as a missionary Sister. In her times, however, mission congregations for women were just in their beginnings, and the German “Kulturkampf” barred religious foundations in her homeland.

Therese sought ways to respond to her vocation, first in the Society of the Sacré Coeur, and later as a dedicated parish helper in Brussels. However, the urgency of her longing for an apostolic missionary commitment left her no rest. Therese returned to her family, searching for ways to do something to bring faith to those who lack its joys. In 1876, she rented and later bought part of the former Benedictine Abbey at Neuwerk. Her dream: a community of missionary Sisters, a formation house for missionaries; the reality: a few orphans, charitable works, a small group of women following a common rule, though not openly because of the Kulturkampf.

Finally, a light: in 1882, at 49 years of age, Therese met Father Francis Mary of the Cross Jordan who, in 1881 had founded the Apostolic Teaching Society in Rome. Father Jordan’s totally apostolic spirit convinced her immediately that here was the road willed for her by God. She became a member of the Society on September 5, 1882, ready to leave all to follow the Founder’s call.

On December 8, 1888, the foundation of the Sisters’ branch of the Society of the Divine Savior (Salvatorians) as the Society is called today, took place in Tivoli near Rome. Mary of the Apostles became the Community’s mother and guide.

Both Founders had always wanted the center of the Congregation to be in Rome, center of the universal Church. This became a reality in 1894, and from there the Community has spread throughout the world. Today the sisters are present in 28 countries on five continents.

The foundation had been laid, and Mary of the Apostles’ life task was accomplished. She died in Rome as the community celebrated midnight Mass, December 25, 1907. Paul VI declaring her Blessed on October 13, 1968, confirmed her as an exemplar and intercessor for a truly apostolic life. Her remains are preserved in a special chapel in her honor at the general motherhouse of the Congregation in Rome. Her feast is celebrated on September 5.